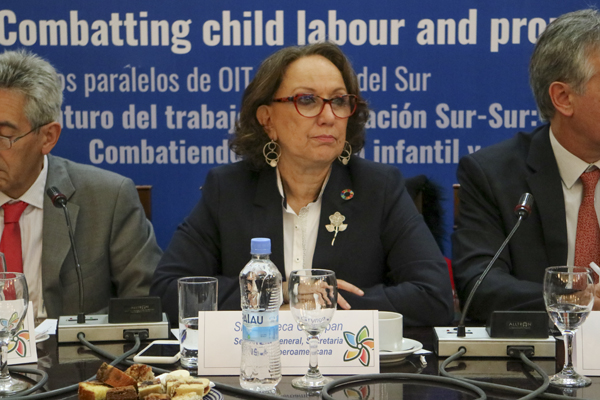 Rebeca Grynspan, Secretary General of SEGIB and Member of the Global Commission on the Future of Labor of the ILO, March 2019

1. Within the framework of the 2030 Agenda, what is the perspective and role of SEGIB in the dynamics of South-South Cooperation?

The BAPA +40 conference is a historic moment to reflect the important changes we have seen over the last 40 years in the dynamics of development cooperation. It will also be a moment to learn from a large number of emerging economies that have positioned themselves as influential actors in different crucial areas of cooperation. From the exchange of experiences to the strengthening of capacities, from the transfer of technologies and knowledge to the construction of exchange networks, we have seen such a remarkable growth in South-South cooperation that we can see it even in the data of international economic transactions. Such dynamic forces have brought to light a new and varied group of actors, who have acquired international influence, and have consequently acquired global responsibilities, bringing new worthwhile challenges.

Within the framework of the 2030 Agenda, South-South Cooperation plays a central role because it is based on the same philosophy of development cooperation, a philosophy based on collective action and solidarity among allies. Through cooperation, we are joining efforts and systematizing them under the framework of the Sustainable Development Goals, thus taking advantage of synergies that allow us to be strategic in achieving each objective. On the other hand, our way of working is also a reflection of the philosophy of the 2030 Agenda: which encompasses a solidarity, horizontal, peer-to-peer way of working that is based in the principle, that there is no country so rich that it cannot learn, and not a country so poor that it cannot teach.

One of the most valuable and unique features of Ibero-American cooperation is its dynamism and its vocation to learn from its own experience. Between 2006 and 2015, our countries participated in approximately 7335 South-South Cooperation programs, projects and actions. 80% were carried out in bilateral modality, 13% through triangular cooperation and a small, but significant, number at the regional level.

At the Secretariat General of Ibero-American States (SEGIB) we have taken advantage of this vast data to develop an annual report on South-South Cooperation (SSC) in the region. The SSC report is a unique report in the world that is now in its eleventh edition. The protagonists of these reports are each and every one of the countries of the Ibero-American region, who have shared their experiences through an online platform that we have created and that is also unique in the world. These reports have allowed us to analyse impacts, look for efficiencies and offer increasingly wider ranges of solutions adapted to the specific challenges of each country. Our South-South Cooperation reports are the best example of how much we can achieve when we work with engagement, seriousness, and enthusiasm.

Therefore, we are very happy to be here: we have a lot to teach and a lot to learn!

2. What is your vision about the Future of Work and the perspective of young women and men of the South? What is the role of South-South cooperation to stimulate this reflection?

An important issue that is discussed in the framework of the event organised by the ILO and the South Centre is the Future of Youth Work. On January 22, we presented the Final Report of the World Commission on the Future of Work, in which we proposed “a people-centered program” as an instrument for a successful transition to the future of work. A program based on investing in the skills of workers, updating labour institutions and promoting decent and sustainable work. And that has among our main focuses our youth, which will be the protagonist of the future, but that currently suffers acutely underemployment and informality at work.

Our main premise is that technology empowers those who have access to it. That is, to the people who were trained to use it. Therefore, investment in our young people will be mainly educational and will strive to equip them with the skills needed to get the good jobs of the future. An education that uses avant-garde tools, including hybrid online-offline learning, that benefits from modern catalysts such as the fields of education and that teach so-called soft skills, including leadership, communication, teamwork, the creative solution of problems, which are skills that not only teach us to learn, but we also “learn to learn”.

In this matter, the Ibero-American space has much to contribute. One of the most relevant results of the Erasmus experience in Europe is that young people who have done this type of educational mobility have lower rates of unemployment and higher wages. Therefore, through “Campus Iberoamerica”, in SEGIB we are developing a similar program that will allow our university students to move and cross the Atlantic in search of these enriching experiences that are formidable in the promotion of soft skills.

The policies developed in the new educational ecosystem proposed by the World Commission will be profoundly enriched by South-South Cooperation. This is a subject where we must invent, be creative, try different instruments and tools that are efficient from an economic point of view and effective educationally. In this topic it is better to work together, sharing ideas and experiences, from the South-South Cooperation perspective, and systematizing our efforts in reports that allow us to distinguish the best solutions and adapt them to the contexts of each country.

Finally, we must take the Future of Work theme to the political and legislative agenda of our region, and we must do it together. We must create and update rights. Among them, I highlight the universal right to continuing education, the right to social protection (in times of labour transition), and the right to the universal guarantee of decent work that includes and reunites the achievements of the last century. The latter is valid in terms of living wages, protection of occupational safety and health at work, family conciliation and fair working hours. This must be done by adapting these achievements to the new labour context, including more autonomous jobs and fewer lifelong professions. It is our recommendation to ensure decent work regardless of its modality, and decent work regardless of its duration.

Ms Grynspan is one of the “Commissioners” for the “Future of Work Commission” that released its report on the 22 January 2019. She is the Secretary-General of the Secretariat General of Ibero-American States, an international multilateral institution which brings together Spanish and Portuguese speaking countries of Latin America plus Spain, Andorra, and Portugal. As a recognised leader in promoting human development, she has greatly helped to focus the attention of the world and Latin America on critical issues such as the reduction of inequality and poverty, gender equity, South-South cooperation as tools for development and the achievement of the Sustainable Development Goals. Ms. Grynspan will be presenting the results of the Future of Work report from an SSTC perspective, bearing in mind the challenges for youth.