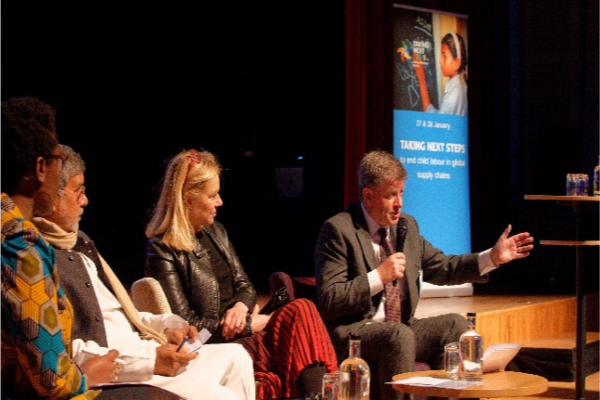 The conference Taking next steps to end child labour, was organized by the Netherlands and the Global March, with the support of the ILO, against the backdrop of need for combating child labour and its worst forms by 2025. Latest statistics shows that 152 million girls and boys, aged 5 to 17 years old, are still victims of child labour despite the numerous efforts of the international community. Governments, businesses and NGO’s have therefore committed to the elimination of child labour by 2025, as part of the Sustainable Development Goals (SDGs). The workshop focused mainly on the private sector’s role in combating child labour, and the necessity of due diligence, while involving social partners.

During his opening statement, ILO Director-General Guy Ryder called for a multi-partner approach to address child labour, while recalling that 2021 will be the United Nations International Year for Combating Child Labour, as well as the V Global Conference on the topic. The Dutch Minister for Foreign Trade and Development Cooperation, Sigrid Kaag, announced that the Netherlands will join as a Pathfinder country of Alliance 8.7 (the first EU Member State). The minister also reaffirmed that her policy priority on sustainable production and trade is the elimination of child labour in global supply chains.

The director of the “Fight against Child Labour” department in the Ministry of Labour of Côte D’Ivoire announced that his country is supporting Alliance 8.7, while trying to move beyond pilot and working through public private partnerships (PPP), multi-stakeholder partnerships and NGOs to establish a coherent response. The country is preparing an Action Plan to combat child labour with some key areas: 1) girls and boys shall go to school and be provided with social services; 2) tackling poverty – a child can work as of 16 years of age; as long as they have health, security and training; 3) institution-building including legal processes. The speaker highlighted the South- South cooperation with Ghana, as both countries are joining forces to combat child labour in the Cocoa Industry. The two governments are committed to work with workers’ and employers’ organisations, as well as national and multinational companies. This session, which also included the participation of Malaysia, Peru and Nigeria, provided an opportunity to share experiences, good practices and lessons learned among different actors in selected Pathfinder countries. It drew on existing examples of South-South cooperation and collaboration between different stakeholders to identify good practices that can be adapted to different contexts and supply chains to accelerate action for the elimination of child labour. IOE and ITUC repeated the need for wider social partner participation and investigation of cases of child exploitation in the world of work, while seeking alliance 8.7 implementation.