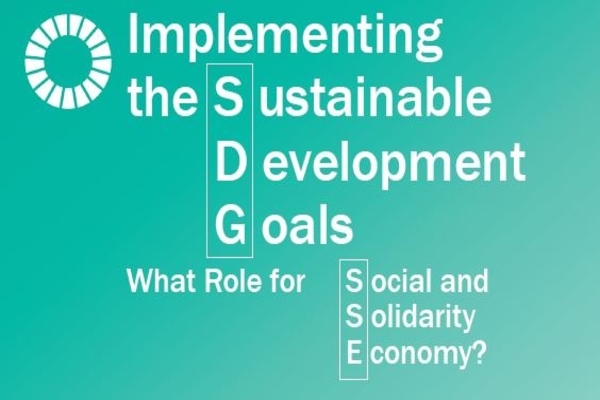 The event, held at the ILO headquarters in Geneva, is part of a series of conferences resulting from a call for papers launched by the UNTFSSE in 2018. It aimed to identify and mobilise research from different regions and territories which, by critically examining the role of the Social and Solidarity Economy (SSE), can contribute to the UNTFSSE and ILO’s efforts to scale up and promote SSE as means of implementation of the Sustainable Development Goals (SDGs).

The role of South-South and Triangular Cooperation (SSTC) on the SSE was discussed in the lunchtime special event “SSE and South-South and Triangular Cooperation” on 26 June. Jürgen Schwettmann (International Consultant), Leandro Morais (Professor at the Universidade Estadual Paulista – Brazil), and Gianluca Salvatori (General Secretary of EURICSE) participated in the debate which also had the presence of Anita Amorim (Head of the ILO ESPU/PARDEV) and Roberto Di Meglio (Senior Specialist at the ILO Enterprises/COOP).

During the special event, the panelists provided examples of how the SSTC can contribute to the SSE. According to Jürgen Schwettmann, in countries with high levels of informality, the SSE can be the bridge between the formal and informal economy. In this sense, the StreetNet, a network of street vendors in India, was pointed out as a good practice that can be shared and disseminated among other countries in the Global South.

Leandro Morais highlighted the umbilical relation between SSE and SSTC by noting that many guiding principles (e.g. solidarity and mutual benefit) are shared by both, which makes them complementary instruments to leverage the development of territories. In addition, he stressed the relevance of the ILO Academies on SSE as platforms to promote the dialogue on SSE and SSTC by bringing together scholars from the South.

Gianluca Salvatori focused his presentation on the case of Medellin, Colombia, one of the many examples of successful implementation of SSE in the Global South. According to Gianluca Salvatori, the city has put in practice an urbanization project that integrates the marginalised and vulnerable population, an experience that can be adapted and implemented in other territories.

In the closing comments, Anita Amorim and Roberto Di Meglio stressed the ILO contribution to strength the links between SSE and SSCT. In the past few years, the ILO has engaged in initiatives that demonstrate the complementary between SSTC and SSE. Among them, the more than ten ILO Academies on SSE held in different locations (Morocco, Brazil, South-Africa, Costa Rica, among other countries) are especially relevant experiences to be mentioned as they promote a platform for sharing and advancing dialogue among people responsible for the promotion of SSE around the world.

Click here to see the photos of the event.

For more information on the ILO Academies on SSE, please click here.